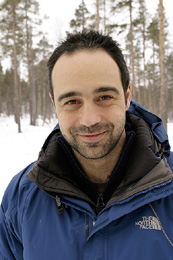 Niccolo Ammaniti was born in Rome in 1966. He has written three novels and a collection of short stories. His first novel, Steal You Away, was longlisted for the Independent Foreign Fiction Prize. He won the prestigious Italian Viareggio-Repaci Prize for Fiction with his best selling novel I'm Not Scared, which has been translated into forty languages and became a prize-winning film. In 2007 his third novel, The Crossroads, received the Premio Strega Prize, Italy's equivalent of the Booker.