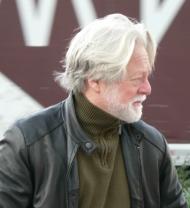 He is one of the world's most respected crime writers. He won an Edgar award for his novel The Chatham School Affair and has been shortlisted for the award six times, most recently with Red Leaves, which was also shortlisted for the Duncan Lawrie Gold Dagger award. He is author of twenty-six books of which twenty-three are novels. He was born in Alabama, educated in Georgia and now lives with his family between New York City and Cape Cod. He began his career as a teacher and worked as a book reviewer before turning to writing full time.