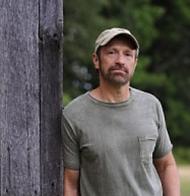 Matthew F. Jones is the author of six critically acclaimed novels as well as a number of screenplays, including adaptations of two of his novels, Boot Tracks and A Single Shot, both currently in production. Another of his novels, Deepwater, named by critics as one of the best novels of 1999, was made into a film in 2005.

After suffering a bad injury he went through a reevaluation in which he determined to follow seriously his passion for writing, wherever it took him. A year later he finished his first novel, The Cooter Farm. At the same time he was embarking on a goal heâd had since reading To Kill A Mockingbird in high school of having a small, general law practice in the upstate county he grew up in. He remained there for the next five years during which he completed his second novel, The Elements of Hitting.

He currently lives with his family in Charlottesville, Virginia, where he is working on a new novel and an original screenplay he recently optioned to a Hollywood production company. He has taught writing at a number of colleges and universities as a visiting writer and/or guest lecturer, including at Randolph College, Lynchburg College and the University of Virginia.