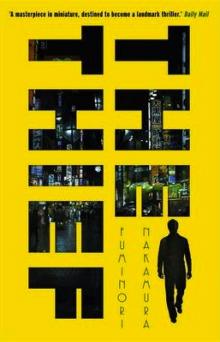 A pickpocketâs life is laid bareâ¦
â¦he might find his life is not his own.

Ishikawa was always good with his hands and he had a smooth tongue. In the past heâd drifted from one job to the next, only picking pockets when he needed money. Before I met him he was in a notorious investment fraud group.
âWhen Iâm making my way invisibly through a crowd, itâs a special feeling. You know how time has different textures?  The tension when youâre gambling or pulling off some investment scam is the same. The instant you move outside the law or sleep with some woman whoâs off limits, like a mobsterâs girlfriend, time becomes saturated. Itâs ecstasy. Intense moments like those demand to be recreated, taking on a personality of their own. They tell you, again, I want that feeling again. Well, for me picking pockets is the greatest thrill of all.â
An arrest warrant was issued for Ishikawa for fraud and he fled to the Philippines, and then as far as Pakistan and Kenya. When he came back, however heâd acquired a dead personâs identity. He had a new driverâs license and passport and certificate of residence â on the face of it he was a free man.
âThe official story is that I died in Pakistan, so now my nameâs Niimi. That means I was already Niimi when I met you. Itâs complicated and I canât go into details, but there are some things youâre better off not knowing.â
Because of the demands of the part of his life I wasnât supposed to ask about, he spent Monday to Friday in an office all by himself, watching the phone. From time to time a call would come in and heâd answer with the name of a company that was probably fictitious. He collected the mail and very occasionally heâd receive a visit from a man who appeared to be some sort of official. Going out on the town with me was pretty much limited to Saturdays and Sundays.
At his request I went to the office several times to keep him company. But as fate would have it, when I was there one day I met the man. The door flew open, I spun round in surprise and there he was, right in front of me. At the entrance he turned off the light and looked silently around the room. I donât know why, but the moment I saw him I regretted having come. In the darkness without saying a word, the man walked inside.
With his black hair and sunglasses he looked like a broker of some kind, but I couldnât guess his age. He could have been thirty, he could have been fifty. In the dim light shining through the curtain his shadow stretched along the wall. Naturally it moved when he moved, and his footsteps rang out strangely. Still watching Ishikawa, he opened the safe, took out ten million yen or so and stuffed it casually into a bag. Then he turned his attention to me for some reason.
âIâll see you again,â he muttered.
I had no idea what was going on so I just stared back at him. After the man left, however, Ishikawa went on talking about pickpocketing, as if he didnât want to give me a chance to open my mouth.
âThereâs only been one time I really didnât like dipping. It was a fireworks display, see? Itâs pretty unusual, but sometimes you get rich people mingling with the crowd, right?â
Looking at his face I gave up on asking about the man. Probably he fell into the category of things I was better off not knowing about. I tried to forget about him, though not very successfully.
âA middle-aged guy watching from his hotel room with his mistress, for example. She starts pestering him to go down and get yakisoba, or wants to go for a walk together or something. Ever since I was a kid Iâve loved fireworks. Poor people can see them for free and theyâre great entertainment. Up in the sky, theyâre equally nice for everyone.â
Sometimes Ishikawaâs expression was so innocent that he looked defenseless, but the echoes of the man still lingered in the room, and his eyes wouldnât stay still.
âTheyâre really beautiful. One of the most beautiful things in this life, in the world. But we take advantage of that beauty, yeah? Weâre waiting for a chance, when everyoneâs absorbed in the beauty. Weâre not looking at the fireworks, weâre looking at peopleâs pockets. Thatâs â I donât know how to describe it.â
Thatâs what he said, but for me it was his skill that was enchanting. Nipping a wallet with three fingers, passing it back to me, and by the time I took out the money and return it heâd already lifted the next one. Then he would lean his arm against the first walletâs owner and without even looking he would put it back in the guyâs pocket again. In my eyes his movements were one of lifeâs beauties. At the time it never occurred to me that this beauty would vanish as swiftly as the fireworks.