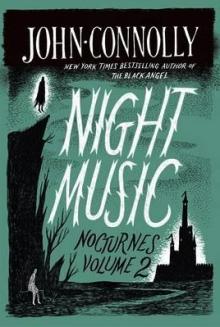 
The Author & The Collection of Stories

âThe likelihood of the monsters on the page or screen finding an immediate physical manifestation in our vicinity is rather slim. But what the horrors presented to us can do is resonate with something deep within ourselves, something very old and very elementalâ¦â
John Connolly

1.The Caxton Private Lending Library & Book Depository â Can the characters we love have a life of their own?
2.The Blood of the Lamb â That would be a miracle
3.A Dream of Winter â Where to start? Where to end?
4.The Lamia - Revenge
5.The Hollow King â Can he keep evil at bay?
6.The Children of Dr Lyall â Touched by another reality

7.The Fractured Atlas â five fragments. Explore a hidden world. Hope it stays hidden.
The Dread and Fear of Kings
The Djinn
Mud
The Wanderer in Unknown Realms
And In Darkness Shall We Dwell

8.Razorshins â The price of moonshine just got higher
9.On âThe Atomization of an Unknown Man (1637) by Frans Mier â In the eye or
the mind of the beholder, or for real?
10.A Haunting â How much would you miss your partner?
11.Lazarus â How would it feel to come back from the dead?
12.Holmes on the Range â A ghostly intermission

13.I live here â speaks for itself

from 'The Hollow King'

So the courtier pursued the king, who did not look back, and in time they came to the forest. The courtierâs heart grew cold at the sight of the mist that enveloped it, but he loved his queen, and could not have lived with his shame were he forced to return and tell her that he had failed at the first obstacle. The wall of mist parted for the king, and came together in his stead.
The courtier opened the vial of the dead childâs blood and smeared a little on his forehead and on the brow of his horse, as the queen had instructed him to do, and instantly they were rendered invisible. With blood trickling from skin and hide, man and beast advanced into the mist.
All of the trees in the forest were dead, their branches bare, their trunks grey, so they appeared almost as insubstantial as the mist itself. The courtier could see only a few feet ahead of him, but he was able to follow the path cut by the king. He came across bones of men scattered so thickly upon the ground that they resembled drifts of snow. He passed the remains of a two-headed giant, impaled by a spear against the split trunk of a great oak, and the withered husk of a creature with the torso of a woman and the legs of a spider, an axe buried in its back.
Worst of all, he descried the features of men on the tree trunks, and believed them the play of shadow upon bark, until he drew closer and saw that they were the shrivelled faces of those whom he had known in life â knights, squires, soldiers â torn from their corpses and nailed to the wood.
But he neither saw nor heard one sign of life.

from 'The Wanderer in Unknown Realms'

Maidensmere lay close to the eastern extreme of the Norfolk Broads, an area of about 120 square miles, much of it consisting of navigable waterways, both rivers and lakes, or âbroadsâ in the local parlance. The village was equidistant from the towns of West Somerton and Caister-on-Sea and close to Ormesby Broad, but by the time I arrived it was late in the evening, and the waters were only patches of silver in the moonlight. There was no one to meet me at the station, and I spent some of Quayleâs money on the relative luxury of a night at the Maidensmere Inn. As Quayle had indicated, a room was available for me at Bromdun Hall, Mauldingâs home, but I had decided to wait until the morning before taking up residence there. I ate a good meal of roast lamb and allowed myself an ale or two before bed, but I did so as much for the company as the taste of the beer. For a man in my line of work, there is much to be learned of a new place by talking a little, and listening more, and Maidenmere was small enough for a stranger to be of passing interest to the locals.

When I was asked my business in Maidensmere, as I inevitably was, I told the truth, more or less. I was there to do some work on behalf of Lionel Maulding, and I would be staying at Bromdun Hall until that work was completed. News of Mauldingâs disappearance did not appear to have circulated as yet, a testimony to his housekeeper, Mrs Gissing, and Mauldingâs solitary ways. It appeared that Maulding was rarely seen in the village and was regarded , at worst, as harmlessly eccentric by his neighbours. But then, this was the old kingdom of East Anglia, and had always regarded itself as somewhat different from the rest of England. There was a tolerance of separateness, for otherness. If Lionel Maulding wanted to maintain a private existence, then there were many others like him in these parts, sharing his outlook if not his wealth. I saw no meaningful glances exchanged at the mention of his name and nobody skulked away into the night, his features clouded with guilt. Such giveaways were the stuff of Sexton Blake stories in the âUnion Jackâ, which was why you only had to pay tuppence for them. The real world was grey with complexity.

ââ¦The original Mr Caxton set up the first depository shortly before his death in 1492. According to the history of the library, he did so when some of Chaucerâs pilgrims turned up on his doorstep in 1477.â
âSome of them?â said Mr Berger. âNot all?â
âNobody remembers all of them,â said Mr Gedeon. âCaxton found the Miller, the Reeve, the Knight, the Second Nun, and the Wife of Bath all arguing in his yard. Once he became convinced they were not actors or lunatics, he realized that he had to find somewhere to keep them. He didnât want to be accused of sorcery or any other such nonsense, and he had his enemies: where there are books, there will always be haters of books alongside the lovers of them.
So Caxton found a house in the country for them, and this also served as a library for parts of his own collection. He even found a means of continuing to fund the library after he was gone, one that continues to be used to this day. Basically, we mark up what should be marked down, and mark down what should be marked up, and the difference is deposited with the Trust.â
âIâm not sure I understand,â said Mr Berger.
âItâs simple, really. Itâs all to do with haâpennies, and portions of cents, or lire, or whatever the currency may be. If, say, a writer was due to be paid the sum of nine pounds, ten shillings and sixpence haâpenny in royalties, the haâpenny would be shaved off and given to us. Similarly, if a company owes a publisher seventeen pounds, eight shillings and sevenpence haâpenny, they charged eightpence instead. This goes on all through the industry, even down to individual books sold. Sometimes weâre dealing in only fractions of a penny, but when you take them from all round the world and add them together, itâs more than enough to fund the Trus, maintain the library, and house the characters here. Itâs now so embedded in the system of books and publishing that nobody even notices any more.â
Mr Berger was troubled. He would have had no time for such financial chicanery when it came to the Closed Accounts Register. It did make sense, though.
âAnd what is the Trust?â
âOh, the Trust is just a name thatâs used for convenience. There hasnât been an actual Trust in years, or no one with a board of Trustees. For all intents and purposes, this is the Trust. I am the Trust. When I pass on, the next librarian will be the Trust. Thereâs not much work to it. I rarely even have to sign cheques.â
While the financial support structure for the library was all very fascinating, Mr Berger was more interested in the question of the characters.
âTo get back to these characters, they live here?â
âOh, absolutely. As I explained, they just show up outside when the time is right. Some are obviously a little confused, but it all becomes clear to them in the days that follow, and they start settling in. And around the time that they arrive, so too does a first edition of the relevant work, wrapped in brown paper and tied with string. We put it on a shelf and keep it nice and safe. Itâs their life story, and it has to be preservedâ¦.â