A Deniable Death by Gerald Seymour 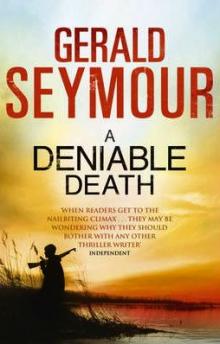 How does covert action feel? It feels exactly like this!


Rashid knew nothing of all this...

The sneeze had been perfunctory, and he was able to get his handkerchief out from his trouser pocket to smother the second. He had not stopped in his work and had not thought through the consequences of that minor eruption from his nose.
Had he done so he might have realised that a fine film had scattered from his face. Some miniscule droplets had wafted down onto the bench and a few had come to rest on the circuit he was putting together.
He had gone on with his work methodically and carefully. He had built the explosive formed projectile. He had a production line in a small factory area behind his workshop and the shaped copper charge was manufactured there to high-precision standards by experienced technicians. By his late-morning break, he had completed the electronics of a killing kit capable of defeating the electronic counter-measures of his enemy, and had begun on another, using the same procedures and techniques. They could almost have been described as a signature. The device onto which he had sneezed was now sealed, boxed and ready for transportation.
He did not know that the device had failed to detonate. A âtrigger manâ, as the Great Satanâs troops described the bomb layer and the peasant charged with firing the device, had panicked when an attack helicopter had flown low over the sand scrape in which he had hidden himself, some three hundred yards back from Highway 6, the convoy route. He had broken cover and run. Later, to gain the reward of ten American dollars, he had fabricated a story of an advancing foot patrol, the need to destroy the firing software, its burial and his flight. The Engineer did not know that the sight of the man emerging from his hiding place and sprinting towards nowhere had alerted the Apache crew: a follow-up had been mounted and the abandoned device retrieved. That had been four weeks and two days after the Engineer had sneezed at his workbench and given forensic scientists something akin to gold dust: a sample for DNA analysis.
At a laboratory in the west of England, a woman in a white suit with a face mask over her mouth and her hair in a shower-cap, would say: âChristmas has come early. It has to be the man who put it together.â There had been a meeting of ammunition technical officers and explosive ordnance disposal experts and the intelligence had been fed to them. One, who had been to the Palace for a gallantry decoration and was said to have exhausted more lives than any streetwise tom-cat, had said, allowing himself a gallows-humour grin: âWe chance our bollocks when weâre out in the donkey shit trying to defuse these things in he hope we can get fingerprints, anything, a speck of blood, because the trigger rag-head cut himself on a thorn â and thatâs just to identify a foot-soldier. Here we have the DNA of the top man in the chain. Weâve got it on a plate. Thatâs a hell of a start.â The chair of the committee of intelligence officers and agent handlers, gaunt from the weight of responsibility, had briefed: âIâm assured that only a small number of men, experts in micro-engineering, are capable of maing these things. As you all know, but itâs worth repeating ad nauseam, four in every five of our own and US casualties are laid at the door of these wretched things.â
The Engineer knew nothing about the basic information his sneeze had provided. He had gone on working through a full day until a car had taken him home. He had eaten with his wife and he had told his children, Jahdahar and Abbas, the ancient Persian story of Simorgh, and of Godâs three sons, Prince Kamshid, Prince Q-mars and Prince Korshid. He had not known of the chasm he had made in his personal security when he sneezedâ¦ Neither did he know that fifty-one days later a slim file would be handed to a journeyman intelligence officer charged with the co-ordination of an intelligence trawl.

She had stood on tiptoe to fasten the top corners of the map to the wall with lengths of Sellotape.
He didnât help her, but sat down and swivelled away from the pictures of bomb damage. His shoes were on the corner of the desk and his chair tilted comfortably as he gazed at the map. Because Len Gibbons had never been to Iraq, let alone visited Iran, he had little understanding of the terrain, topography and general culture of the area. There were large yellow patches â desert â and a pair of narrow green strips that represented the cultivated, irrigated areas beside the Tigris and Euphrates river as they came to a confluence at al-Qurnah before going south as one. There was blue for what seemed to be great inland lakes with little symbols of marshland printed on them. Across the extreme eastern corner of the water-covered area was the bold mauve line of a frontier, and almost on that line, in what was marked as Iran, there was a bold cross in black ink.
She looked at him, and he nodded, all he would offer in the way of praise but Sarah would take no offence. He was, to her, a good man to work for, and she was on board for what the operation sought to achieve. She had no qualms about its morality. She stood for a moment, hands on hips, legs slightly apart, enough to tighten the skirt across her buttocks â but it would have taken more than that to awaken any interest in him. They shared the scent of pursuit and the excitement. She went to make a cup of tea, leaving him to stare at the map.
She could remember the day when his screen had exploded into life, when a sparse file had started to thicken. No one forgot such rare, febrile days.

It was three hundred and nineteen days after Rashid, the Engineer, had sneezed over his workbench that a man walked into the lobby of the British Consulate in the Gulf Emirates city of Dubai and requested a meeting with a diplomat.
The Engineer had gone to work late because he had spent the morning with a doctor in the town of Ahvaz. His wife had been examined because of the persistent, but still relatively mild, headaches that sapped her concentration at work. The doctor had prescribed aspirin and rest, so Rashid had taken Naghmeh back to their new home, then set off for his bench at the small factory. He did not know that an Iranian had requested asylum from the British authorities and would therefore be challenged to explain his value. He did not know that a spook attached to the staff, operating under cover, would say, âYou claim you are a member of the Iranian Revolutionary Guard Corps â you said your unit was from the al-Quds Brigade â but I have to ask you what sort of information you might bring with you that would justify from us your asylum and safety. Facts, my friend, are the currency needed.â
.
.
.
And he was left in the bare interview room, with a well-muscled security guard, while the intelligence officer composed the signal to London that would ask whether such information was indeed sufficient currency for a promise of asylum - only a promise, of course... And Rashid, the Engineer, knew nothing of this.