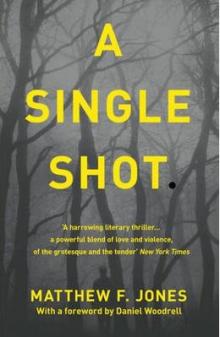 .
.
.
John quietly curses, not because he's worried about losing the deer - unless it can scale rock walls, there's only one way in or out of the quarry - but because he's tired of chasing it and is sorry, too, that the buck has had to endure so much suffering.  He hears a dog barking off somewhere and starts to worry again about being caught and wishes it were colder so that he could hide the carcass in the quarry out of sight from buzzards and coyotes and come back for it the next day before sunup.  Then he decides maybe he ought to butcher the deer right there in the quarry - behind one of the slag heaps - and bring the meat home in two or three trips.  A grouse suddenly breaks cover almost beneath his feet and the frantic beating of its wings nearly gives John a heart attack and he thinks,  "Get this the hell over with."
When he reaches the road five minutes later, the deer is out of sight, but a trail of blood leads directly from there to the quarry, five hundred yards in the distance.  The grass on the road looks slightly impacted to John and some of the smaller rocks freshly dislodged.  He kneels down and takes a closer look, but can't tell whether the road has recently been driven on or only disrupted by the hailstorm two days before.  "I'm goin' to kill that deer," John tells himself, standing up and starting down the road in a nervous half-jog.  "Take what meat I can easy carry, and clear out pronto."
A flock of blue jays suddenly flies up from the quarry and starts squawking, flat out scaring John until he remembers that right about then the deer, bleeding and snorting, had probably stumbled inside and startled the birds.  Still, he can feel his heart pounding in his ears.  Slowing to a walk, he raises the gun to his waist.  He smells spruce, the trees lining both sides of the road.  At the entrance to the quarry, a small canyon with fifty-foot granite walls, he reminds himself that the deer would be crazed enough to charge whatever gets too close, and could, with those antlers, do some damage.
He flicks off the shotgun's safety, then warily enters the canyon overgrown with briars, pine bushes, and crawling vines, stops just inside, looks around, and sees the same half-a-dozen slag heaps, junked truck chassis, gutted generator, plastic-covered lean-to, that have been there for years, and off to the right, the deep water-filled pit where John, as a boy, caught frogs, and behind it, the circular opening in the wall he had never dared enter, on one side of which stands a rusted shovel and pick.
John looks down for the deer's blood and at the same time hears to his left a grunt, then branches cracking.  He shoulders the gun, wheels towards the sound, spots behind a briar thicket a patch of brown-and-white, aims at it, and fires.  He figures he's hit the deer in the head or heart because, without a sound, it drops from sight as if its legs have been severed.
John levers out the spent shell. Dangling the shotgun in one hand, he starts walking toward the thicket, when suddenly a loud snort sounds directly behind him.  He spins around and sees charging out from behind a slag heap, straight for him, the injured buck.
John doesn't even have time to cock or shoulder the gun before the deer is so close he can feel the phlegm flying from its flared nostrils and read the rage in its pain-maddened eyes.
Instinctively hop-stepping to his left, John grabs the rifle barrel with both hands, then swings it upwards as hard as he can.  With a loud crack, the butt connects with the deer's jaw a moment before its antlers pierce John's left shoulder.  He goes down and the buck, standing above him, lowers its head as if to gore him, then suddenly lets out a pained bleat, starts to tremble as if it's been electrically shocked, and drops in a heap next to John.

He rolls to his right, slowly pushes himself with his hands into a squat, then stands.  With the effort, the pain in his gored bleeding shoulder doesn't increase or radiate.  A good sign, thinks John.  He extends his arm gradually forward and back, then gingerly loops it in a full circle, heartened that he has full motion of the joint.
At his feet, the deer suddenly twitches, its leg kicking out as if it will rise.  Startled, John jumps back.  Then the buck lies still.  John sees it isn't going anywhere.  His shotgun butt has crushed its jaw, forcing its teeth into a grotesque grin; its rear quarters are a mass of blood, thistle-matted fur, and exposed bone; it's exhaling as much fluid as oxygen; its eyes are clouded as though it's already in the afterlife.  Looking down at the dying animal, John has the same sad feeling as he did watching his father doing likewise in a hospital bed fourteen years before.
He picks up his shotgun from the grass-and weed-covered gravel, starts to cock it, then changing his mind, wraps both hands around the barrel, hoists the butt like a post-hole digger above the deer's head, and brings it forcefully down.  The deer's skull collapses like a rotten vegetable.  The buck groans once, for several seconds twitches again, then lies still.  Placing the gun on the ground, John thinks it shouldn't have come to this.  The buck should have died in the pines from a single shot.
He reaches up, pulls off his torn sweatshirt, wads it into a ball, then dabs it at his injured shoulder until enough blood has been removed for him to see a jagged puncture wound, half an inch deep, oozing a slow, steady stream.  He unwads the shirt, grips it at both sides of the tear, and rips it in two.  He wraps one piece tight around his bicep, just above where he's bleeding, binding it with a square knot, and the other securely around the wound.
Fighting a sudden urge to turn and run from the quarry, he takes a deep breath and tries to calm the fluttery feeling in his stomach.  He picks up the shotgun, wipes its butt on the grass, and closes its breech. He looks down once more at the deer, then over at the briars.  Holding the gun ready at his side, he slowly walks the twenty-five yards over to the thicket, stops in front of it, and with the shotgun's barrel moves the forward branches aside.  He tries to peer through the tangled thicket to the far side, but it's dense as a sponge, and he can't see anything but more branches and briars.  Nor can he hear anything, not even the blue jays, which, oddly, have gone mute.  "Whatever's there," thinks John, "is bad hurt or dead."
He remembers the flash of brown-and-white he saw, and the shovel and pick standing - not lying - by the hollowed-out spot in the wall behind him.  He remembers reading in a book once about how lives are begun, altered, and wiped out in a second, and something else about people only coming to know themselves through tragedy.  "Where did that thought come from?" he wonders.  "And why? I'm a good hunter," he tells himself.  "I followed a wounded, crazed deer into a box canyon, heard an animal grunt behind me, saw it move, then shot it."
He walks rapidly to the right of the patch, ten feet wide at least and almost that tall, and without hesitating rounds the corner.  On the far side, on the ground five feet in front of him, he sees the worn bottoms of two sneakered feet, then blue-jean-covered legs, a slim torso adorned by an earth-stained, white T-shirt, and a dirty-blond clump of hair protruding from beneath a floppy brown hat.  The body has a circular sweat spot on its lower back and lies facedown behind the brambles, arms thrown out in front of it toward a small denim satchel.
John is hit by a wave of nausea.  Instinctively, he flicks on the shotgun's safety, drops the gun at this feet, runs up to the body, kneels next to it, places one hand on the white neck beneath the clump of hair, and feels for a pulse.  He doesn't find one.  "Come on," he says aloud.  He reaches his hands beneath the body's warm, damp stomach, then carefully rolls it over.  He sees first, in the left centre of the chest, the slug's gaping entry wound, then a woman with her eyes wide open.  "Please, God," says John.  "No."
He raises his balled fists to the sides of his head, closes his eyes, and prays that when he opens them the dead woman will be transported into a dead deer, dog, or bear.  When he looks again, the body is still human, only now John sees a girl.  She is maybe sixteen, with crystal-blue eyes, blossom-shaped clumps of freckles on both cheeks, a small space between her upper incisors where a piece of gum or chewable candy is lodged.  The clump of blond hair is a ponytail.