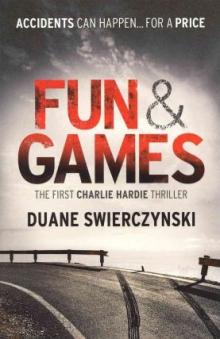 House sitting doesnât get any more dangerous than this!

.
.
.
The prick had been toying with her ever since she made the turn onto Route 23 from PCH (Pacific Coast Highway).
Heâd gun the engine and then flash his high beam and fly right up her ass. Sheâd be forced to take it above 60, praying to God sheâd have enough room to spin through the next finger turn. Then without warning heâd back off, almost disappearingâ¦but not quite.
The road had no shoulder.
No guardrails.
It was like he knew it and was trying to spook her into a bad turn.
Her cell was in the dash console, but it was all but useless. The few seconds it took to dial 911 could be a potentially fatal distraction. And what was she going to tell the operator? Send someone up to Route 23, seventeenth hairpin turn from the middle? Even the highway patrol didnât patrol up here, preferring to hand out speeding tickets on Kanan Road or Malibu Canyon Road.
No, better to keep her eyes on the road and her hands upon the wheel, just like Jim Morrison once advised.
Then again, Jim had ended up dead in a bathtub.
The headlights stayed with her. Every few seconds she thought sheâd lost them, or theyâd given up, or â God, please please please â driven over a bump of asphalt where a guardrail should be and tumbled down into the ravine. But the instant she thought they might have gone...they returned. Whoever was behind the wheel didnât seem to give a shit that they were on Decker Canyon Road, that one slip of the wheel was like asking God for the check please.
She was almost two miles along the road now; ten to go.
Her Boxter was long gone; traded in after the accident in Studio City three years ago. Now she drove a car that suited her age â a leased Lexus. A car for grown-ups. And it was a fine machine. But now, as she took those insanely tight turns in the near dark, she wished she had the Boxter again.
Decker Canyon Road was notorious for two things; the rusted-out chassis of cars that dotted the hills, and its uncanny ability to induce car sickness, even with safe, slow drivers just trying to make their way up to Westlake Village in one piece.
She felt sick to her stomach now, but she didnât know if it was the road doing it to her, or the events of the past few days. The past few hours, especially. She hadnât eaten much, hadnât slept much. Her stomach felt like it had been scraped from the inside.
Sheâd been up for a job that seemed like a sure thing; producers, director, writer, star all in place, a guaranteed fast-track green light. It was a supporting role but in a higher-profile movie than sheâd done in years. A role that would make people notice her again â Wow, sheâs in that? I was wondering where sheâd been. And then it had fallen apart in less than an hour.
Sheâd spent the majority of the past week in her Venice apartment, brooding, not able to bring herself to take much interest in feeding or watering herself or even turning on the satellite cable -  God forbid one of her pieces of shit appear, or worse, a piece of shit sheâd been passed over for.
So tonight sheâd gone for a long late-night drive â the best kind in L.A. Enough wallowing. She wanted the ocean air to blast away the malaise. Blasting away the better part of the past three years would be nice, tooâ¦
And then the headlights were back. Rocketing toward her, practically up her ass.

Number of accidental vehicle crash deaths in the United States per year: 43,200

She stomped on the accelerator and spun the wheel, tires screaming as she made â barely â the next finger turn.
The bastard stayed right behind her.
The worst part was not being able to see beyond the span of her headlights and having to make lightening-fast decisions, one after the other. There was no room to pull over, to let him pass. If passing was even on his mind.
She wondered why she presumed it was a him.
And then she remembered why. Of course.
At some point she knew Decker Canyon Road crossed Mulholland, and there was even a stop sign. Sheâd happily pull over then and give him the double-barrel salute as he drove by.
How much farther was it? She couldnât remember. It had been years since sheâd been on this road.
The road continued to snake and twist and turn and climb, the tires of her Lexus gripping asphalt as best they could, the headlights bobbing and weaving behind her, like she was being pursued by a forty-foot electric wasp.
Finally the road levelled out â a feature she remembered now. From here, the road would ease up for a quarter mile as it ran through a valley, followed by another series of insane uphill curves leading to the next valley. A few seconds after, everything seemed to level out â
- then she gunned it â
60, 70, 80
- the electric wasp eyes falling behind her â
90
Ha, ha, fuck you!
The Lexus made it to the next set of curves within seconds, it seemed, and all she had to do now was slide and skid her way along them and put even more distance behind her. She applied some brake, but not too much â she didnât want to lose momentum.
Halfway through the curves, though, the electric eyes returned.
Goddamnit!
Right on her, curve for curve, skid for skid. It was like the car behind her was mocking her. Anything you can do, I can do better.
When she finally saw the red glow of the Mulholland stop sign out in the distance, she decided to fuck it. Hit the turn signal. Slowed down. Used the bit of skirting that now appeared on the side of the road. Go ahead, pass me. Iâm stopping. Iâm stopping and probably screaming for a while, but Iâm done with this. Maybe Iâll take a look at your license plate. Maybe Iâll call the highway patrol after all, you reckless asshole.
She pulled the Lexus to a skidding stop, her first since the PCH, which felt like years ago. Then she turned left and pulled off to the side.
The car followed her, pulled up next to her.
Oh, shit.
She reached for her cell and power locked the doors at the same time. The other car appeared to be a goddamned Chevy Malibu, of all things. Some kind of bright color â it was hard to see in the dark. The driver popped out, looked over the roof, made a roll-your-window-down gesture.
Phone in her hand, she paused for a moment, then relented. Pressed the power window lock. The glass slid down two inches.