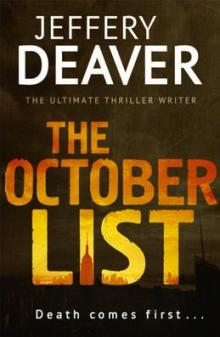 Intrigue from the startâ¦a puzzle inside an enigma.
How could that be an end to a story?
Trust Jeffery Deaver â it is!

A clever, demanding stand-alone . . . As the ingenious plot folds back on itself, the reader has to reevaluate and reinterpret the constantly shifting "facts" in the case. The finished picture finally emerges with a shock of recognition. This is brilliant craftsmanship in a vastly entertaining package. â Publishers Weekly

In THE OCTOBER LIST, the always entertaining Jeffery Deaver attempts the almost impossible: the back-to-front thriller, beginning with its climax and ending with the planning of the initial crime . . . It's very readable â The Times

Jeffery Deaver's most fiendish thriller ever . . . The reader is never lied to in Deaver's brilliant shell game, merely misdirected, and the best part of this trick is that despite being in on the game, we continue to make false assumptions . . . as the pace quickens and the story continues to backtrack, solid evidence, established plot points and sturdily built characters all begin to come undone, until what started out as an interactive game becomes a truly unnerving exercise in deception. â New York Times

Even halfway through, it seems possible that Deaver has been defeated by the mind-boggling technical challenge of delivering surprises in back-to-front time. But after the reverse journey reaches the couple's first meeting, his gamble is thoroughly vindicated by a series of twists in which he resembles a conjuror who each time seems to have performed his final trick, but then tops it. â Sunday Times


â¦..No more to say. And, on good authority, he ainât ever going to do it again. So it is truly a once in a lifetime experience!"