The Wrong Man by Jason Dean 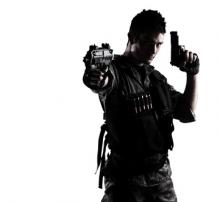 James Bishop had lost thirteen minutes of his life. Not something you can afford to happen when you are on a close protection assignment. Randall Brennan and his daughter Natalie were the ones who needed protection.  Threats had been made to the family, which was why RoyseCorp, New Yorkâs finest personal security firm, had been called in. For an ex-marine and his handpicked merry band of men it should have been a routine job.

Now, though, James Bishop has been taken down with chloroform and it is anything but routine. In the struggle he had managed to stab his assailant in the arm and got a glimpse of the lower part of his face. Instinctively, as soon as he got his senses back, Bishop had taken out one of the assailants, but his team had been overwhelmed in a fire-fight. Worst of all, both clients had been brutally slaughtered and the secure vault laid wide open. Body count was seven and someone made sure enough physical evidence pointed to Bishop as the perpetrator with the million-dollar motive. No room for any doubt. They'd got him.